Sexual abuse, sexual assault, rape — although these terms are sometimes used interchangeably and they have many similarities, these terms all mean something different. Let’s break it down.

Sexual assault is defined as sexual contact or behavior that occurs without explicit consent of the victim. This can include any of the following, according to RAINN:

Assault is something that occurs infrequently and for a short amount of time. It might be coerced sex with a friend at a party, groping by a stranger in a public place, or retaliatory sex by a partner.

Rape is a legal term defined by the FBI as “penetration, no matter how slight, of the vagina or anus with any body part or object, or oral penetration by a sex organ of another person, without the consent of the victim.”

The state of Michigan does not use rape as a legal term. Instead, Michigan laws refer to sexual crimes as criminal sexual conduct in the first, second, third or fourth degree. Each “degree” addresses different types of contact by the perpetrator.

As a victim of sexual assault, it is not up to you to know the precise term for what you’ve experienced when speaking with a WISE advocate or anyone in the legal system. However, this information might be helpful if you are trying to understand a troubling sexual experience.

Spousal sexual abuse is common in relationships where there is domestic violence. One partner might use sex as a means of controlling the other. The abusive partner might tell their victim they can’t have or do something without first engaging in sexual activity.

When we talk about sexual abuse, we often talk about childhood sexual abuse. This is a form of child abuse, and it is a crime. Children can never consent to sexual activity, especially with an adult or authority figure.

Parents might recognize some of the warning signs of childhood sexual abuse before their child discloses anything about the problem. RAINN provides a list of indicators of sexual abuse.

One in four girls and one in six boys will experience childhood sexual abuse before their 18th birthday.

WISE offers services to families dealing with childhood sexual abuse, and victims of sexual assault.Call WISE today at (231) 796-6600 or toll-free at 1-800-374-WISE (9473). Press 0 to speak to an advocate. The hotline is available 24 hours a day, seven days a week, and our advocates are here to listen. 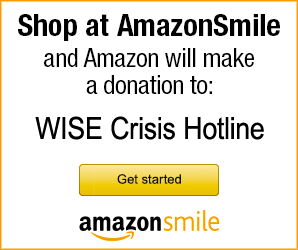